There is always a lot going on in the world of basketball because of its nature. When it comes to sports there are a wide variety of variables. Players can be traded, can retire, can get injured or a variety of other things. All of these aspects can affect them on the court, some more than others, and sometimes these outside forces can cause for some personal expression.

One topic I’ve been following for a while that could make for great content, is LeBron James returning to the Lakers rotation. There have speculations to when he will returnbut it is looking as if it could be any game now. I would expect that when he does return he will have something on that will cause talking.

With the trade dead line coming up shortly players and teams are starting to scramble; and there is no player more desired this trade season than Anthony Davis. (To keep on a similar topic) This is important because the Lakers really want him, he just announced he would like to be traded and the Pelicans apparently aren’t taking his calls. In my opinion this is a time to watch what he is wearing. Jerseys are sometimes very telling as to where a player stands. 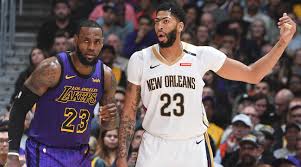 Straying away from the NBA a little bit, the NFL has heard some noise recently after an incredibly obvious blown call in the NFC Championship game. In short… it debatably cost the Saints a trip to the super bowl. Now, this is news in itself but some actions taken afterwards are what have turned heads. During this Pro Bowl week, a Saints defensive end, Cam Jordan, wore a shirt that said “Blow Whistles, Not Games” on the back and “Make Calls, Not apologies” on the front.

Back to the NBA. It was recently Greg Popovich’s birthday and that is something that needs to be acknowledged. Pop hasn’t always had the best style but I think his attitude can make up for some of the gaps. His birthday could be celebrated by looking at his fashion from way back in his early coaching days and comparing it to now. 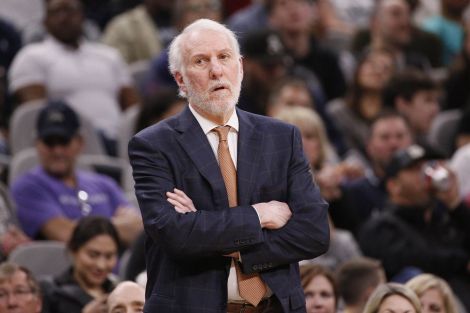 Lastly, Derrick Rose is having the comeback season for the ages. He is showing us what he looked like when he won the MVP and was battle it out with LeBron in the east. With this season going the way it is going it wouldn’t be surprise is there is a big overhaul of his Adidas line. Although the line never really went away, this could be a good opportunity for them to hit the market hard again and expect D-Rose to be giving us the first looks.

James Harden amazed fans at Madison Square Garden last night by scoring a Rockets Franchise record 61 points…. among other records. In classic Harden fashion our eyes were drawn to his post-game outfit as well. 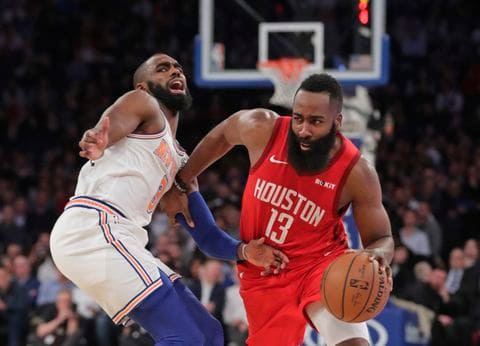 Last night James Harden had another historic game. The Rockets went into MSG riding a bit of a crazy wave considering The Beard has been absolutely tearing up the floor. Going into last night he had scored 30 points in 20 consecutive games. That streak would continue in The Garden with James doubling that goal of 30 points with 61. He added 15 rebounds and a few steals to his stat line.

After the game Harden wore a temperature appropriate, thin turtle neck and some fitted, cream colored sweat pants. The color choice of the turtle neck was an interesting brownish, yellowy, mustard. These colors most likely affected his color and pattern choices throughout the rest of his outfit.

That being said, covering the corduroy turtle neck was a long overcoat with a wide lapel. Because of the mild color of the turtle neck; the jacket was where he threw in a bit more color. The red and purple plaid was just enough color to make you aware but not overwhelmed. Harden wears plaid quite frequentlyand it seems to be in his regular wardrobe rotation.

What really drew your eyes to the outfit, for the most part, was the neon yellow scarf he wore. The scarf was the flashing light to the outfit. This seems to be on purpose to get your initial attention which then allowed the plaid and more subtle touches to keep your vision and mind occupied. 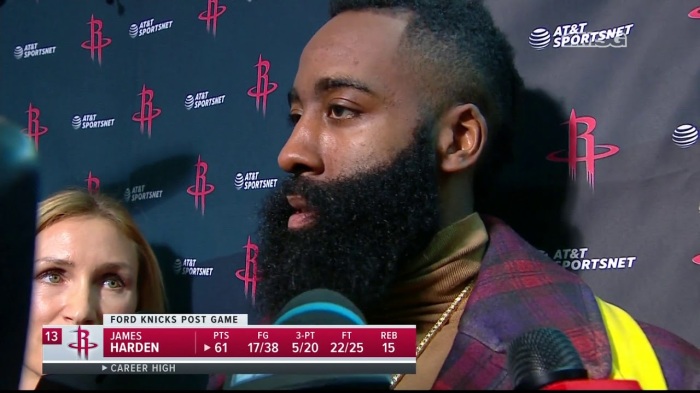 What Harden is doing is really astonishing. Only wilt Chamberlain has scored 30 plus points in more consecutive games at 65 straight. Last night was quite a night for Harden individually. He set his career high in points, a franchise record and tied Kobe Bryan with the most points scored in MSG. Scoring 30 points in an NBA game really is pretty incredible in itself, but doing it night in and night out is remarkable…. Especially considering in his last 6 games his lowest scoring night was 37 points.

With all of this excellence on the court it is clear that harden is not only trying to elevate himself but elevate his team as well. Everyone wants that shiny ring that comes with being champion.

Along with his most iconic accessory, his beard, he wore a fairly thick gold chain with a pendent of, what appeared to be, Shaq on it. The chain was a familiar box style and could very well be a David Yurman chain. Although it seems a bit bigger and considering the pendant, it is probably custom. This is a great, basic piece… but I could imagine he would prefer something for his ring finger. 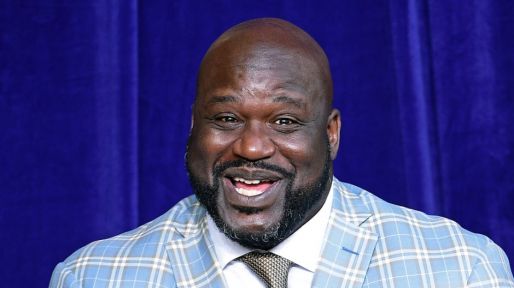 LeBron is using his recovery time to not only heal his body but ease his mind as well; as he is seen strolling into the staples center with wine in hand. Is this his most headline worthy outfit?

LeBron James has had some eye popping pregame looks in the past. From wearing a suit with shorts, a full Chicago Cubs baseball uniform or leather pants, he clearly enjoys fashion. He uses his clothing, shoes, sneakers and accessories to send messages. His outfits are simply an extension of his personality. He uses his clothes to show his mood and how he is feeling to fans, foes and everyone in-between. 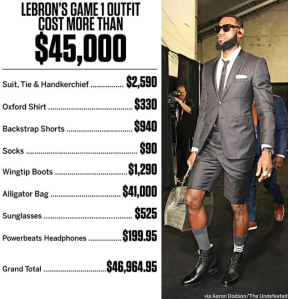 Prior to game 1 of the 2018 NBA Finals LeBron rolled into Oracle Arena wearing what appeared to be a simple, understated grey suit…. or at least from the waist up.

It’s nothing new for LeBron to wear suits pregame, he has done it numerous times.But this time there was something missing. Going against the traditional look, LeBron had the pants tailored to be shorts. This was a bold move, even for someone of The Kings stature.

This move has been done by others but LeBron changed the look a bit by wearing high socks of a similar color to the suit. As opposed to ankle or no show socks. This helped the look by not having as much leg and more blend of the color. It actually made the shorts appear longer in a way.

King James has been riding the bench since Christmas Day due to a groin injuryhe suffered playing the Golden State Warriors. This is not to say he isn’t usually a bit over the top with his outfits… But these days it is certainly taking a more playful turn. LeBron walked into the staples center drinking a glass of red wine. A move I don’t think any player has tried…nor would any other player be allowed to do. 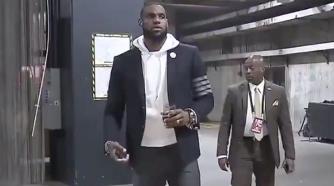 The King of basketball was very understated in terms of his clothing color and pattern choices. LeBron’s choiceof a simple, pattern less white sweatshirt contrasted, obviously, well with a blue blazer and jeans; only sharing color with the sweatshirts tiny aglets on the hood strings. But the glass of red wine has to be his most daring accessory to date…. besides the 41,000 alligator bag from earlier in the post.

But… could this wine be a magic potion? Or maybe… some sort of magic pill? It is highly doubtful and very true that LeBron just loves wine.

But his return to the court is the only thing that can answer that question. All we know is when it comes to LeBron, potion or not, pill or not… His game will look good on and off the floor. 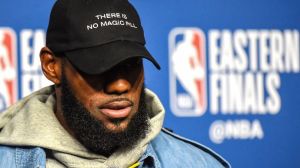